So let me be the first to tell you that I love aniamals. They are so cute and fluffy and they are sometimes your only best friend at times. We all have at least seen a dog/cat in real life, unless you live under a rock everyday. But to admit,we find animals cute when they are not the smartest of pets. We all see people and animals fall or worse for hours straight.But is it the time animals are taking a stand and actually turing into the top of the food chain?

So we all actually should have seen this coming. It all started when humans started to train pets. Pets learned simple commands like sit and roll over, right? But then after that, we as humans failed. We should all just be eradicated from the Earth.The people that caused this were pet lovers/owners. Because of,The sweaters When pets learn their commands/manners, they are trustworthy and loved alot. But petowners, like Ima McFaker, do the worst thing ever, put clothes on animals.Ima was going to NotForver21 Retailer Store to buy her pet dog Trixie a sweater to match with Ima's purse. So Ima got home from NotForever21 and she put the sweater on Trixie. What Ima did not know about was the chemical in the sweater.Trixie was an obient dog and never did anything bad,even though she hated Ima's 10 year old brother(Charlie) for being allergic to dogs.Ima got home from work to find Charle dead on the floor. 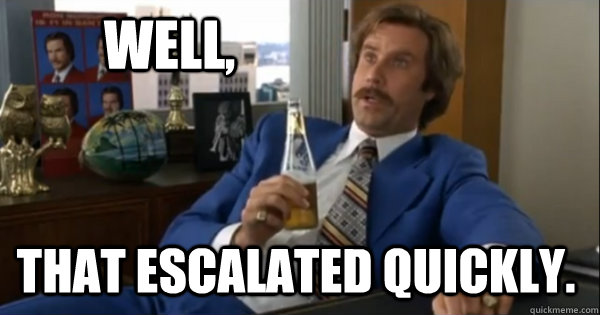 Bitemarks on his head and the words "Why are you still alive? Did you do this to us? I though you loved us. If you did than you would know that WE HATE CLOTHES! written on the wall in red, signed with a paw print. After that Ima called the authorities.119 called her crazy and did not come to her. Ima did not know what happened and hurried to Trixie because that was the only thing alive becuase for some reason, her babysitter was no where to be found. Right before Ima grabbed Trixie, she noticed Trixie had red on her sewater. Ima wiped it off stain and started to move to Alaska, where there is no one. In the car, Ima learned the truth. In the car Ima put everything that she could fit in 1 suitcase and ran to her car. As Ima was reaching the car buckle to secure Trixie, trixie bit Ima's hand. arm locked in mouth, Trixie rippped off Ima's arm.Ima knew then the truth, but it was to late. Ima died in the car with blood all over her. The only part of Ima left was a note saying: Noo one should ever get their dogs clothes. If they do, then it is a death sentence. Tell my mom I......(cuts off and ends)The strange thing is that things similar to this happen every day now. All people that are not allergic to pets and never had a pet are left, they are the resistence. They kill the maniac pets. They got hold of Trixie and killed her on the spot because she was the main cause of the end of the world. They tested the sweater out in a lab and found that a mixtre called "LOVE" was in it. "Level Of ViolencE". The resitence went to NotForver21 and fought their way to the CEO if NotForever21, Ms.NIA AMANI. There were 300 people in the resitence. After the fight, there was 10 peopele left. They all fought through Nia's people guards and animal guards. Wheb the 10 got to Nia, she was cornered. Nia got handcoffed and she spoke like a robin about what happened. She said that they confused "LOVE" with "love", an ingredient to make pets lovable and obiedent. Now because of the mistake, all humans are dead. but she found an antedote. She gave the antidote to the resistence. Micheal Brown, head of the resistence, and her out the window of the 50 story building. The resistence knew it was nessary to do. The next thing to do was a suicide mission.They had to blow up almost everything. The resistenece left 2 people to repoulate the eath, Geniveve Adams and Adem Everline. They were put in a secret base to clone every human life lost that day. The resistence blew up a antedote bomb that killed every living cell in the world.Now it was over and lifw after that went back to life.

The codenames for Geniveve Adams and Adem Everline were Adam and Eve based on last name and they were the only ones left. They cloned the humans and life turned normal, before all of the crazyness. This is why animals should not wear clothes, the end almost happened because of this.But at least it was over. Finally, now you could sat the end.

Adam and Eve had 2 kids named Christy Jesus and Gensus Chris, Adam was expecting another child named Isacc, until the couple died and the only thing remaining thir was a bite mark on their backb that said "BEWARB"on their arms. THE END?